Dissociative Identity Disorder used to be called Multiple Personality Disorder(MPD), but was always classified as a dissociative disorder; not a personality disorder. [3][5][6]

Dissociative Identity Disorder is not rare, but relatively common, affecting around 1-3% of the population [1].

Most people with DID have a mix of dissociative and posttraumatic symptoms, as well as non-trauma related symptoms.[2]

Amnesia in people with DID can take many different forms, including amnesia for significant events in the past OR for events in everyday life.

Amnesia is not limited to traumatic or stressful events. [4]:293


DSM-5 Diagnostic Criteria
The newest guide used in psychiatry to diagnose mental disorders is the DSM-5, released by the APA in 2013.[3] It gives the following diagnostic criteria for Dissociative Identity Disorder:

Understanding the DSM criteria for DID
The key characteristic of Dissociative Identity Disorder is the presence of at least two distinct personality states, (or in some cultures, an experience of "possession"); amnesia is the next most important characteristic.[3]:292 The alternate personality states are often referred to as "alters" or alternate identities,[4]:193 although many other terms may be used including Apparently Normal Part of the personality (ANP), and Emotional Part of the personality (EP).[1] Alters are only overt (obvious) in a small minority of people with DID in clinical situations. A change introduced in the DSM-5 is that it is possible to diagnose DID without directly observing the alternate personality states by identifying two clusters of symptoms, described in the DSM-5 as:

Sense of self and Sense of agency - Criterion A (Alters)
A discontinuity in a person's sense of self can affect any part of someone's functioning. For example, involves a person feeling or behaving in a way that is out of character for them. Attitudes, outlooks and personal preferences like preferred foods or clothes may change sudden and inexplicably.
Discontinuity in a person's sense of agency means not feeling in control of, or as if you 'own' your feelings, thoughts or actions. For example, going from feeling that their thoughts, feelings and actions belong to themselves, to experiencing thoughts, feelings or actions that feel as if they are 'not mine' or belong to someone else. This is not the delusional belief that they belong to an outside person, it is the perception that they do not they do not 'own' their own speech, thoughts, and/or behavior.
Recurrent Amnesia: Criterion B
Many different types of amnesia can occur.[3]:293 If no recurrent gaps in memory for the past or prescent occur but all other criteria are met then a diagnosis of Other Specified Dissociative Disorder Presentation 1 is given.[3]:292
Healthy Multiplicity
Healthy multiplicity is achieved when a person has multiple senses of identity, but does not have clinically significant distress or impairment as a result of their dissociative identities. A person who meets all the diagnostic criteria for Dissociative Identity Disorder except Criteria C (distress or impaired life) may be referred to as a healthy multiple, and does not have any dissociative disorder since all of them require distress or impaired functioning.
ICD Diagnostic Criteria
The last edition of the International Classification of Diseases, the diagnostic guide published by the World Health Organization is the ICD-10, published in 1992.[2] The draft ICD-11 beta criteria for Dissociative Identity Disorder classifies it as a Mixed Dissociative Disorder, and proposes this definition:
ICD 11 draft - Dissociative Identity Disorder
Code 7B35
"Dissociative identity disorder is characterized by the presence of two or more distinct, nonintegrated or incompletely integrated subsystems of the personality (dissociative identities), each of which exhibits a distinct pattern of experiencing, interpreting, and relating to itself, others, and the world. At least two dissociative identities are capable of functioning in daily life, recurrently take executive control of the individualâ€™s consciousness and functioning and include a substantial set of sensations, affects, thoughts, memories, and behaviours. The symptoms are not consistent with a recognized neurological disorder or other health condition. The disturbance is sufficiently severe to cause significant impairment in personal, family, social, educational, occupational or other important areas of functioning."[6]

Differences between the ICD-10 and Draft ICD-11 for DID
Several significant changes have been made, including recognizing each alter identity/dissociative part of the personality as a "subsystem of the personality" rather than a complete personality. It also recognizes that some alters may be partially integrated with each other, for example co-consciousness (sharing memory and/or feelings in the present). The name has changed from Multiple Personality, and it has been given greater prominence.
ICD 10 Diagnostic Criteria
Code F44.81
In the World Health Organization's ICD diagnostic manual, Dissociative Identity Disorder is still referred to as Multiple Personality, and classified as one of several Other dissociative [conversion] disorders within code F44.8. The diagnostic criteria are:

Diagnostic Tests and Interviews
The Dissociative Experiences Scale is a self-assessment screening tool (a questionnaire)that is useful for identifying people who experience a high degree of dissociation. A definite diagnosis should only be made by an qualified clinician. This can be done using a clinical interview based on the Dissociative Experiences Scale, or by using one of the two clinical interviews developed for Dissociative Disorders : [1]:126-127[11]:21, [12], [14]

Research shows that treatment based on the treatment guidelines, which focuses primarily on outpatient psychotherapy, improves symptoms, increases functioning and reduce the rates of hospitalization.[7], [9]:169 Poor outcomes were found when treatment did not follow the guidelines, for example treatment which did not directly engage alter identities and seek to reduce amnesia,[9]:169 or when treatment was focused on "memory recovery". [9]:180 Harm was far more likely to occur when DID was not treated at all. [9]:169 Treating Dissociative Identity Disorder did not only consistently improve dissociative symptoms, it also improved patients' general distress and depression.[9]:175
Psychotherapy
Psychotherapy (talking therapy) is the primary method of treatment, and has the most evidence-based research showing significant improvements with psychotherapy which adheres to the treatment guidelines. No specific type of psychotherapy is recommended. [7], [9] Psychotherapy for Dissociatve Identity Disorder follows the basic principles of general psychotherapy[7] with additional of techniques which address dissociative symptoms, for example guidance on working with alters . Treating Dissociative Identity Disorder is not primarily based around uncovering trauma memories or trauma exposure techniques. A recent study that compared experts in the treatment of Dissociative Disorders to community clinicans found that experts spent more time on techniques for the containment of trauma memories than uncovering them.[8]:4 Experts also spent more time on grounding and safety interventions.[8]:4

The goal of treatment is integrated functioning, which means a workable form of integration or harmony among identities.[1]
Integrating Alters is not essential
Some people mistakenly believe that the goal is to have a single identity rather than different separate alter identities, this is known as final fusion. This is a goal for some people, but resolution is more common, this is a co-operative arrangement between the identities.
See also: Healthy Multiplicity 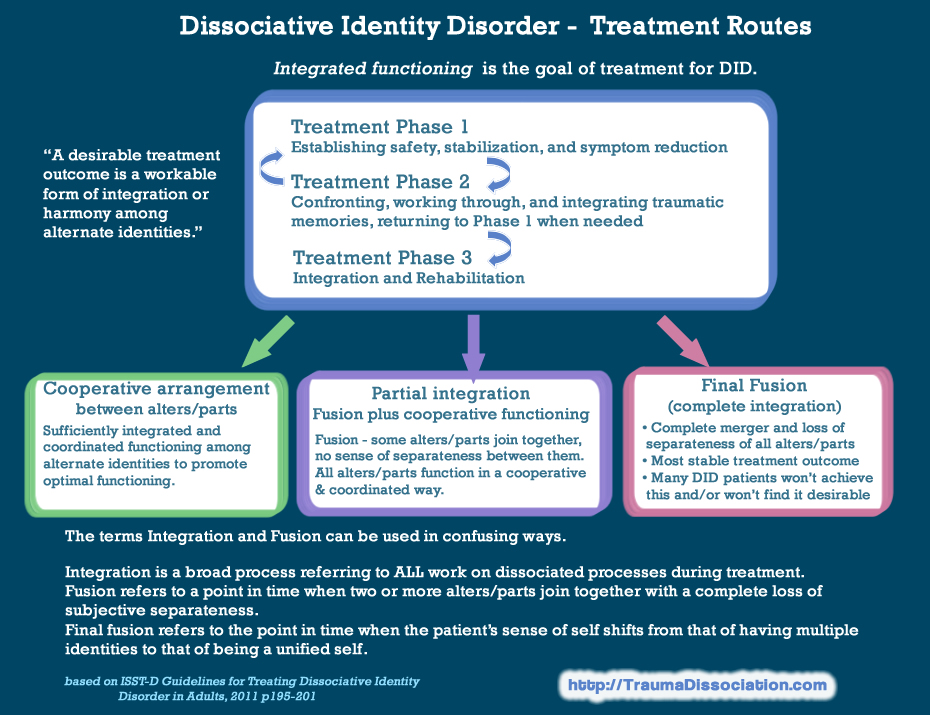 Although psychotropic (psychiatric) medication is not a primary treatment for complex dissociative disorders, most DID patients do take some form of medication. This typically targets the comorbid conditions, including PTSD, mood disorders (e.g., depression), and any obsessive-compulsive symptoms.[1] The use of anti-depressants is particularly common. People with DID or other complex posttraumatic conditions may only partially respond to medication, in DID there is the further complication of potential amnesia for whether other alters have refused to take medication or taken too much. The DID treatment guidelines for adults state that alters may report different responses to the same medication, possibly due to physiological differences, physical symptoms which have a psychological cause (somatoform symptoms), and/or the alters' experience of separateness.[1]

This information can be copied or modified for any purpose, including commercially, provided a link back is included. License: CC BY-SA